Mehndi has become such an important part of wedding that we can not imagine an Indian wedding without Mehndi. Mehndi enhances the beauty of a bride and is also a part of Sola Shringaar of a woman.Like other ceremonies Mehndi also takes place before wedding. It is said that the bride can not step out of the house after this ceremony.

Generally the Mehndi function is celebrated in the house of bride and groom separately. In general tradition the paste of Mehndi is sent by the groom’s family for bride in a silver tray. When the Mehndi is applied to bride’s hand then the elder ladies sings the traditional songs.

Mehndi is basically derived from the word mendhika which refers to Henna plant. The standard color of Mehndi is brown. Haldi and Mehndi both are part of Vedic customs. It also has a great significance in Indian classical dance form Bharatnatyam. Although Mehndi is a very old custom in Asian subcontinents but initially Mughals promote the idea of Mehndi. They introduced it in 12th century. But the origin of Mehndi can be considered from Egypt because it was a art form in Egypt.

Mehndi is basically made from plant called Henna which is found tropical climates of  Malaysia, Africa, India. The plant is commercially cultivated in Rajasthan, Punjab, Gujarat and parts of Madhya Pradesh.

The paste of Mehndi is made from the green coloured powder of dried henna leaves. The powder is mixed with water, lemon juice, drops of eucalyptus oil, and mixed till a smooth paste is obtained and the paste is kept overnight for the better results and then the paste is put into the plastic cone so that it can be applied on hands easily.

How to Apply Mehndi

As told earlier that the paste is put into the plastic cone and the tips of the cone are cut according to the need of the design, now simply squeeze the cone and make whatever designs you want. 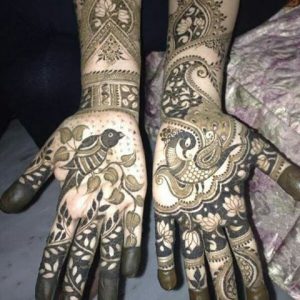 Earlier applying Mehndi was not considered as a part of profession but now a days even on small functions professionals are called to apply mehndi. Various designs like Peacock, Replica of bride and groom, floral designs remains always in trends. It is also said that the bride writes the name of the groom in her hand and the groom has to find his name. The Mehndi is applied to bride’s hands, forearms,legs.

After applying the Mehndi it has to be kept for 4-5 hours until it gets dry. The color gets darker with the body heat so sometimes to get the deeper color the hands are wrapped with the plastic to cover the heat. To prevent the fall off of dry mehndi a mixture of lemon juice and sugar is applied to hands. Another way of getting the color deeper by getting the smoke of cloves on hands. If we talk about the removal of the Mehndi then it should never be removed by water, we can remove it by gently rubbing the hands

Traditionally within the involuted designs of a Bride, the name of the groom is included and after the marriage the groom has to find his name in the post marriage ceremonies. It is also said that more deeper the color of the bride’s mehndi more she will get love and affection from her in-law’s , specially husband.

Basically in an Indian wedding there are lots of fun and Mehndi Ceremony is a way to keep all the relatives together and have fun, dance and masti to create a lot of memories.

Jaipur mehandi artist is very trust worthy and experienced artist and we take mehndi booking in jaipur. if you looking near mehndi wala in jaipur Call us at 8384962465. 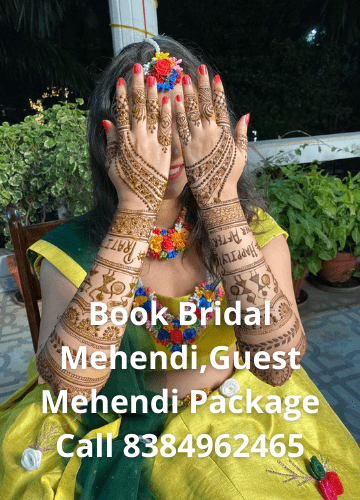 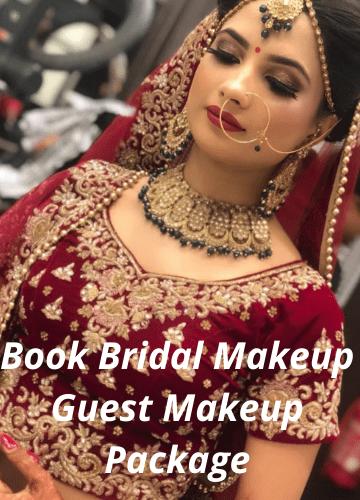